A Vital Factor In Weather

The temperature of air affects air pressure, determines the amount of water vapor a specific volume of air can hold and is responsible for rising and descending air currents. Since temperature is such a vital factor in these weather conditions, it is helpful to thoroughly understand it and its effects.

The Most Vertical Rays Of The Sun Are The Hottest! 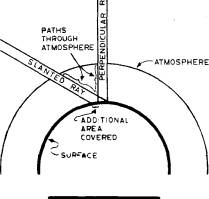 First, perpendicular or vertical rays pass through less atmosphere than slanted rays. As a result, they pass through less energy-absorbing impurities, such as dust, and arrive at the earth's surface with more energy. Second, the energy from the rays concentrates in a limited area, like the beam of a flashlight that is directed at the floor. If the rays are slanted (or the flashlight tilted), the same energy is spread over a much larger surface area. Each given area then receives a smaller portion of the total energy.

What Happens To The Sun's Energy?

The sun's rays do not always heat the objects they encounter. For example, the sun's rays go right through a transparent material, such as glass, without heating it. When the sun's rays strike shiny surfaces, such as mirrors, the rays are reflected. Those objects also are not heated. Only when the rays of the sun are absorbed are they converted into heat.

In general, solids are better heat-absorbers than liquids, while dark rough objects absorb heat better than light-colored, smooth objects. This explains why sand (a solid) at the beach gets hotter than the ocean (a liquid) in the afternoon, and why people wear light-colored clothing in the summer and darker clothing in the winter.

Easy come, easy go! Objects that heat up quickly also cool off quickly. At the beach, the sand heats up quickly during the afternoon while the water heats up very slowly. At night, the sand quickly loses the heat it gained during the afternoon and is much cooler than the adjacent water. Consequently, on a hot summer day, it is a good idea to head for water in order to cool off. Since it takes water a long time to heat and cool, the ocean or lake remains cool from the previous winter. During the winter, though, coastal sections and locations near a lake have milder weather, since the water retains some of the heat acquired during the previous summer. This explains why coastal sections get rain during the winter while inland areas, away from the warm influence of the ocean waters, get snow. Likewise, easy come, easy go means inland sections generally have hotter summers and colder winters, while coastal locations adjacent to an ocean or large lake have cooler summers and milder winters.

Heat Can Be Transferred

Heat is transferred through the atmosphere in three ways.

Heat is applied at the bottom. The heated material above the flame rises. Colder fluid sinks on the opposite side then flows toward the candle side to replace the rising fluid. A "convection current" is formed. Later we will show how rising and sinking air currents are responsible for much of our weather - both good and bad.

Forecasting Temperature: What Factors Must Be Considered

We discussed earlier that it is normal for "bottom air" near the ground to be warmest. Temperatures normally get colder higher in the atmosphere. However, there are occasions when the bottom air is cooler than the air above. When this happens we have a temperature inversion. It occurs most commonly on nights that are clear, calm, and dry. The ground cools off rapidly by radiation, subsequently cooling the air near the ground by conduction. The cold air near the ground, being denser and heavier, stays where it is. The warmer air above, being less dense and lighter, does not sink and make contact with the cold ground. The result is a lack of vertical movement. Convection cannot take place! Under these circumstances, pollutants are trapped near the surface and unhealthy air-quality conditions may result.

Temperature inversions are broken when the sun's rays are able to heat the earth's surface, which in turn heats the bottom air that begins to rise. A convection current is established. As we will show later, temperature inversions often are responsible for certain types of precipitation.

How Is Temperature Measured?

We all know that the instrument used to measure temperature is the thermometer. But there are several types of thermometers. The liquid version uses mercury or alcohol in a glass column. These liquids expand at a uniform rate as heat increases. Alcohol is used in extremely cold climates since mercury freezes at -39°F and would be useless at temperatures below that. The freezing point of alcohol is -200°F. No place on earth ever gets that cold! (Record worldwide low temperature is -127°F, Vostok, Antarctica.)

Thermometers also can be composed of a dual metallic strip that expands and contracts at varying degrees, causing the strip to bend up or down as the temperature rises or falls. Modern digital thermometers use solid-state electronics to indicate air temperature.

Temperature can be expressed either in degrees Fahrenheit or degrees Celsius. These simple formulas convert one scale to the other.

To convert a Fahrenheit reading to Celsius. use the formula:

To convert a Celsius reading to Fahrenheit, use the formula:

To convert 25°C back to degrees Fahrenheit: 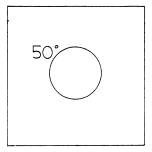 Weather observations are taken hourly in all large cities and airports and relayed via high-speed internet circuits to computers in Washington, D.C., and Kansas City, Missouri. From here they are transmitted nationwide and worldwide. Meteorologists and computers then can record this data on appropriate station models shown on a large map. A station model is a circle on a map representing a weather station, usually identified by three letters or numerals. Weather conditions are shown with numbers or symbols at specific locations around this circle. For example, in the diagram, temperature is placed next to the upper left-hand area of the circle. 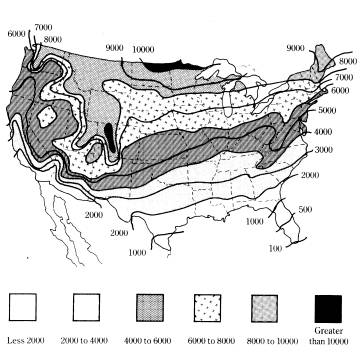 The map indicates the average annual number of degree-days across the United States.

Please note, through the Amazon Associate Program, we earn money from products you buy through our site. All proceeds go to the HOPE For Youth Foundation.